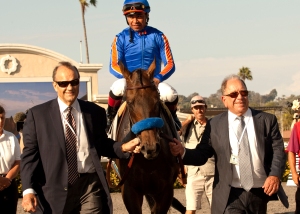 DEL MAR —- In the end, The Dude was just too much.

After two straight years of frustrating losses in Del Mar’s $1 million Pacific Classic, Game On Dude ran the other 11 horses off their hooves on Sunday.

Game On Dude, who was the 8-5 betting favorite, beat runner-up Kettle Corn by 8½ lengths. It was the largest winning margin in the history of Del Mar’s premiere race.

“He made a huge statement,” said Bob Baffert, Game On Dude’s trainer. “It was a great day of horse racing in Southern California.”

The statement the 6-year-old gelding made was that he will be one of the favorites in the Breeders’ Cup Classic in the fall at Santa Anita.

Going into the Pacific Classic, there was plenty of uncertainty surrounding the Game On Dude camp. The thoroughbred didn’t seem to like Del Mar’s Polytrack surface the last two summers, despite finishing second last year to Dullahan.

Then there was the game of musical jockeys.

Mike Smith had ridden The Dude to five straight victories, but he had a commitment to ride Royal Delta on Sunday at Saratoga Springs, N.Y. So Baffert went out and got the nation’s leading jockey in money won, Joel Rosario. However, Rosario suffered a broken foot in a freak riding accident on Friday at Saratoga and will miss six weeks of action.

Baffert then turned to Martin Garcia, who had been exercising Game On Dude in the mornings, but hadn’t ridden him in the afternoon for more than two years. Garcia was spoken for in the Classic aboard Liaison, owned by Arnold Zetcher, another Baffert client, but the trainer asked to scratch the horse and run in another race next weekend.

“(Garcia) finally got paid for working the horse (in the mornings),” said Baffert of the $600,000 first-place check.

Garcia just was a pilot gliding around the race track through fractions of 24.19 seconds, 47.96 and 1:12.61. Canadian invader Delegation, who was suppose to pressure Game On Dude, stayed a length or so behind after being very wide through the stretch the first time. By the head of the stretch, Game On Dude had a 6-length lead and he hit the finish line in 2:00.69 for the 1¼ mile.

“I feel amazing,” said Garcia, “especially here at Del Mar in its biggest race. I felt really comfortable around there.”

Almost everyone watching the race knew it was over when Game On Dude was trotting around the track.

“We wish there had been some pace in front of them, but it wasn’t there. The other speed horses just didn’t go,” said trainer John Sadler, who finished second (Kettle Corn) and third (You Know I Know).

Garcia took Game On Dude straight to the rail from the No. 10 post as the rest of the field tried to find their spots.

“The move out of the gate, that was it,” said Baffert. “I told Jill (Baffert’s wife) that there were no excuses today. It was a tough loss last year (to Dullahan). This is a very emotional win.

“Martin said when (Game On Dude) here this year, he could tell he was a different horse. He was doing everything smoothly.

“We talked about different scenarios and how there was so much speed lined up, but I told Martin he had the fastest horse.”

Baffert also had instructions for the top of the stretch.

No one could run down Game On Dude.

“Today, he really moved way up,” said Baffert, who saw his horse move to 29th on the all-time money earning list with $5.6 million. “He’s getting better.”

The news never seems to end at seaside oval.

+ Jockey Garrett Gomez held a 90-minute meeting with track stewards Sunday morning in hopes of getting permission to begin exercising horses on Wednesday.

That isn’t going to happen.

Gomez, who admitted to falling off the wagon and drinking again, had his follow up meeting with the Del Mar stewards moved from Wednesday morning to Friday afternoon.

Did Gomez fail his drug/alcohol test? Only time will tell.

Will the stewards play hard ball with Gomez because he failed to show up on opening day and honor his commitments (also for Thursday and Friday)?

The bigger issue might be that Gomez made no attempt to contact the stewards when two weeks ago when he was asked to do so. If Gomez had called to say, he fell off the wagon and was in a rehab a program, the stewards might have a different view of the situation.

As things stand now, the earliest Gomez will be able to get on a horse would be next Saturday and the first possible mounts he might be able to accept would be a week from Wednesday.

We’ll find out on Friday, what the latest chapter is.

Regular rider Mike Smith will be at Saratoga that day to ride Royal delta for trainer Bill Mott, which means Rosario and Smith will pass each other in the air somewhere in the middle of the country.

However, Ron Anderson, Rosario’s agent, told Del Mar media officials “Game On Dude may be the best horse in the country and I would think he’d be a huge favorite (for the Classic).”

“No one monkey stops my show,” said Romans.

+ The Grade I Bing Crosby was interesting on several levels.

Trainer Tim Yakteen scored his first Grade I victory with Points Offthebench ($8.80), who edged Goldencents by a head.

On Saturday, the loss came in the Fleet Treat Stakes. On Sunday, the wager was on Comma to the Top, who finished fifth.

+ The Del Mar jockey colony had better be ware of Julien Leparoux when he goes to the lead on the turf course.

Twice on Sunday, Leparoux went wire-to-wire scoring with Pontchatrain ($9.40) and Horizontalyspeakin ($15) in the 10th race.

Leparoux normally rides from behind on the grass, but he was loaded on both horses and nobody pressured him. 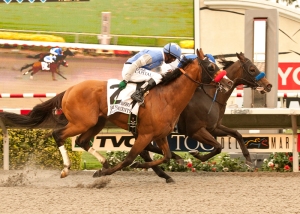